How to Overcome The White Screen of Doom Without Being Inspired 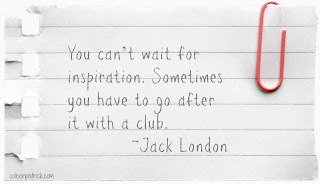 So here you are face to face with someone who used to be your friend.  Your very best friend.  But now the situation has become dire and you have been forced into an impasse.  The situation needs to be resolved now before the both of you can think of any kind of forward progression.  It...has come to this.

Lack of inspiration is similar to writers block but only because time isn't on our side in that matter.  Writers Block is the inability to write due to the lack of drive and the lack of words whereas if a writer lacks inspiration he/she still has that drive to write but cannot because they're putting too much pressure on themselves.

You can sit for hours staring at that blank screen and I can guarantee that you will lose that contest if you don't take initiative.  The tick-tocking of the clock will resonate within your mind like a beating hammer against your head.  Anxiety will ensue.  You'll start sweating blood, burst a capillary or two, especially if you're on a deadline.  You're required to write, and write you must.  But how?  Wait until the mood strikes?  If you wait, the mood may never happen and you'll have lost precious time you could have spent creating your masterpiece.

Even students have trouble finding inspiration.  If there is a paper due, sometimes it's put off until the last minute.  Not necessarily as a result of procrastination, rather, the lack of the pitch or thesis.  Along comes Time who hangs out and taps the writer or student on the shoulder and points to his watch with a knowing smile.  Its running out.  The hourglass is near empty and you have only a few grains left before your assignment is marked late.  Such a struggle and this lack of inspiration can be so very damaging for both the student and the career writer.  How do you find that kick-off point to write without having to be inspired?  Do you try to get inspired by actively searching for a reason to be, or do you simply wait for it to sneak up from behind and tickle your sides?

Taking a more active approach to your writing will enable you to be more efficient in your writing.

As Time sits idly watching as I conclude this piece, I am left with yet another piece of advice to give.  Use your time wisely, for our time is always limited and not exactly on our side.  In order to get what you want, you must go out and get it for nothing in this life falls into your lap without putting forth the effort.  In the end, you will be well equipped to overcome any obstacle that should come your way so long as you keep the faith and maintain your course.  Sometimes even developing a writing routine will assist you in maintaining that constant stream of inspiration.

J.V. Stanley is the CEO and Founder at Writerz Block, an online editing and tutoring business. She is also the Development and Marketing Director at Miracle E-zine. She has had over 20 articles published, and 40 poems published in various mediums. She has recently published her first book of poetry "Fire and Water" available on Amazon.

Posted by Unknown at 8:32 PM No comments: 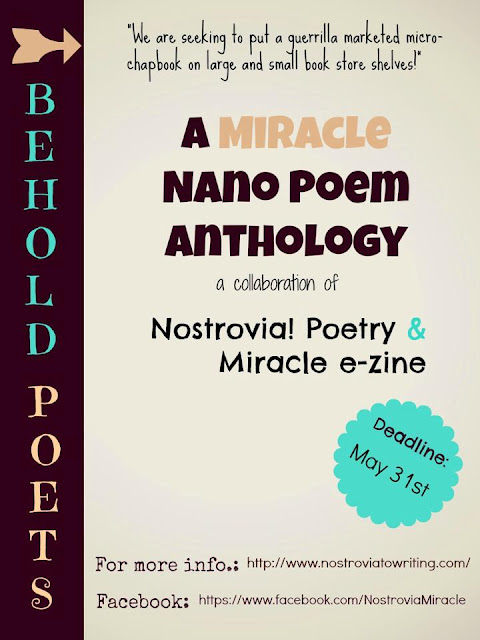 Miracle E-zine and Nostrovia! Poetry
Micro-Chapbook Contest: A Miracle-Nano Poetry Collection Anthology
Location Worldwide-Nostrivia! Poetry and Miracle E-zine teams up to produce a micro-chapbook/contest/anthology hybrid.   The anthology features the winner and short-list of a micro-chapbook contest.  The winner is published in his/her own Nano Poem Collection (micro-chapbook), and will also be featured in an anthology of five other poets who made the short list.
According to the website, “Submitting to this publication automatically puts you in place among the contest entrances.  The contest winner is published individually through their own micro-chapbook, which will be featured through Nostrovia! Poetry as a separate publication from the anthology.  The anthology will consist of 6 separate Nano Poem Collections, the contest winner and 5 runner ups. The 5 runner ups will not be published as stand-alone Nano Poem Collections, but do receive homage in the anthology. “The goal behind this venture is to unite writers from all walks of life and give them an opportunity to see their work in print.
ABOUT THE COMPANIESMiracle E-zine is a platform for highly regarded collections of literature by both aspiring and seasoned authors.   This magazine enables writers to share their talents, which would otherwise remain hidden within the shadows of those afraid to venture out into the grandiose world of publishing.  Founded in June of 2012, the mission behind the magazine has focused on the writer and artist.  Collecting intelligent writing with embellishments of creativity derived from the minds of individuals with varying levels of talent.  Artists, graphic artists, musicians; poets, storytellers, technical writers; journalists, writers from so many walks of life come together in this amazing literary magazine.  From its launch date, this magazine has been a breath of fresh air for this very multicultural world.  The works contained within the bindings enable the reader to catch a glimpse into not only the writer, but the culture and traditions of their nationality.  Nostrovia! Poetry is a small press dedicated to the spreading of poetry and writing, with a particular focus on the youth. Nostrovia! Poetry publishes writing through various forms of media including blogs, contests, e-zines, nano poem collections, and anthologies.
CONTACT INFORMATION
Miracle E-zineGuntaj Arora website: http://miracleezine.wix.com/miracle-e-zineemail: miracle.ezine@yahoo.com
Nostrovia! PoetryJeremiah Waltonwebsite: www.nostroviatowriting.comemail: jeremiahwalton@nostroviatowriting.com
For more information on the contest: https://www.facebook.com/NostroviaMiracle


J.V. Stanley is the Founder and C.E.O. of Writerz Block and the Development and Marketing Director at Miracle E-zine.  She is also the co-author of the book, 'Fire and Water',  a collection of poetry available on Amazon and a regular contributor to Miracle E-zine.
Posted by Unknown at 10:49 PM No comments:

It all started innocently enough.

The theme here seems to be our gripe about details that seem to make sense to the uninformed, but grates upon the nerves of the informed. The author thought up something that seemed genuinely interesting, but it doesn't pass muster when subjected to critical thinking.  It hurts the most when it is discovered that the one informed group that the author is trying to impress turns out to be the most hurt and the most critical.  Even worse, some of these fields are practically careers in their own right and some authors don’t have time for more research into that subject than a brief foray into the internet.

Let’s look at one scenario:

Our heroine, a supernatural detective is reasonably well funded and carries a “Firestar 9mm” handgun on her adventures.  It is a semi-automatic pistol; either silver, black, or several other shades, and looks fairly intimidating.  As an author's choice, it makes sense.  It is pretty, aggressive, and high tech enough to fit with the heroines personality.  It cost about two hundred dollars, which seems reasonable for a pistol carried by a professional.
Then our reader takes a look at it. “A Firestar? Really? That piece of junk isn’t even manufactured anymore!  Where is she going to get new magazines for it? Or parts if it breaks?  And who would trust their lives to a cheap, two hundred dollar gun?”

Not really the response the author was looking for, is it?

Now, you can go for the Tom Clancy approach and be very detailed, if that is your thing. That can work and can also provide more problems, so let’s just keep it simple. Now back to the heroine.  She wanted something that could be slightly personalized, easily taken care of, and iconic. How about a “1911”?  From an author’s standpoint, it is a brilliant choice. They come in a variety of calibers, colors, and specifications. They are equipped with the necessary parts for comments like “He snapped the safety off before he walked into the room.”, and “The last thing he heard was the girl cocking the hammer with her thumb.” 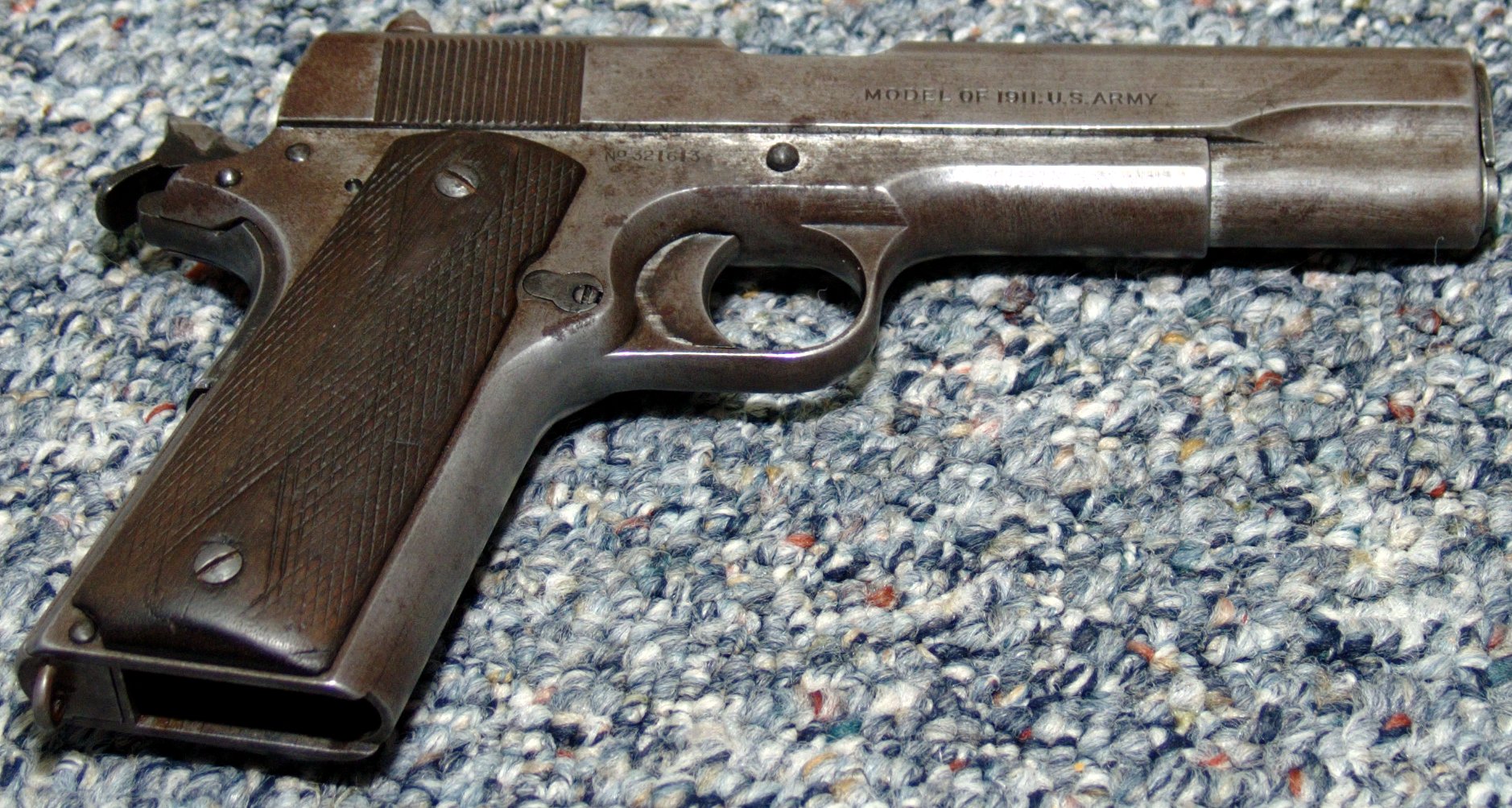 There are dozens of manufacturers, colors, calibers, accessories, and magazine sizes. They are generally very easy to find at local gun stores and online so research into your work is simple. Now your heroine gets to have the sidearm you envisioned and your readers get the accuracy their hobby demands.

Of course, writers shouldn’t be limited to cookie cutter choices.  That’s where Writerz Block comes in. We have specialists in dozens of fields that can answer questions, help with ideas, and turn your creation into the work of art you want it to be.

Adam Skidmore spent most of his formative years in the backwoods of Michigan, doing his best to get into trouble. While moderately successful, he joined the army in 2001 and is currently assigned to a Special Troops Battalion in the First Armored Divison, based out of El Paso, Texas.  While not an author himself, he has written book reviews for publications such as Miracle E-zine and works as a guest contributor for Writerz Block.
Posted by Unknown at 10:22 PM No comments: 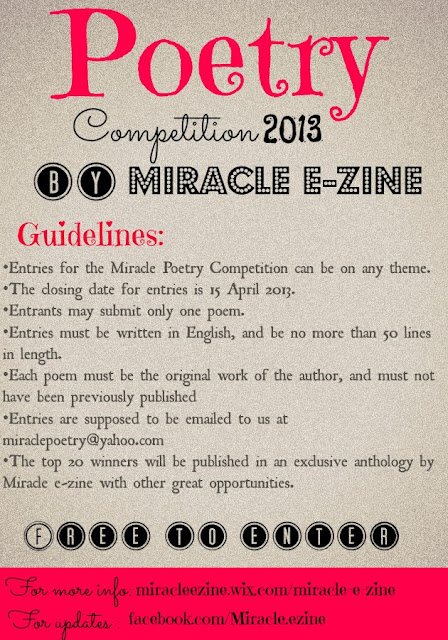 Literary magazines such as Miracle e-zine is a platform for highly regarded collections of literature by both aspiring and seasoned authors. This magazine enables writers to share their talents, which would otherwise remain hidden within the shadows of those afraid to venture out into the grandiose world of publishing. Literary magazines hold a wealth of knowledge between the virtual bindings, transporting the reader from the misty fogs of destitution to enriching enlightenment spanning the extent of the entire world populace. Miracle E-zine is nothing quite like any literary magazine of its quality. It showcases the authors within the splendidly designed virtual pages. A wealth of knowledge and insight from such a various scope of talented individual writers makes it hard to determine which piece of literature would be a favorite or a classic. Founded in June of 2012, the mission behind the magazine has focused on the writer and artist. Collecting intelligent writing with embellishments of creativity derived from the minds of individuals with varying levels of talent. Artists, graphic artists, musicians; poets, storytellers, technical writers; journalists, writers from so many walks of life come together in this amazing literary magazine. From its launch date, this magazine has been a breath of fresh air for this very multicultural world. The works contained within the bindings enable the reader to catch a glimpse into not only the writer, but the culture and traditions of their nationality.


Miracle E-zine is currently hosting its first Poetry Competition and is requesting individuals who have a passion for writing and poetry to submit their work to this contest. There are neither fees to enter nor restrictions upon genre or type of poem. The top twenty winners of this competition will receive recognition in an exclusive anthology showcasing their literary talents and accomplishments. The deadline for submission is April 15, 2013. Spread the word of poetry and showcase your work in this high-quality literary magazine.
Posted by Unknown at 1:33 AM No comments:

Promote your Page too

Promote your Page too